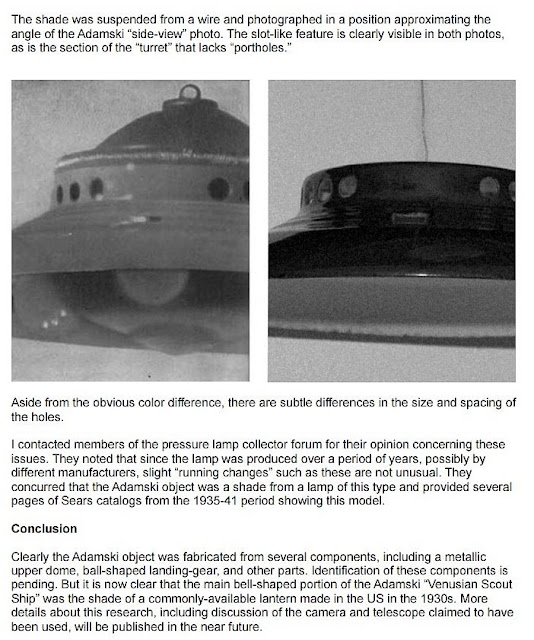 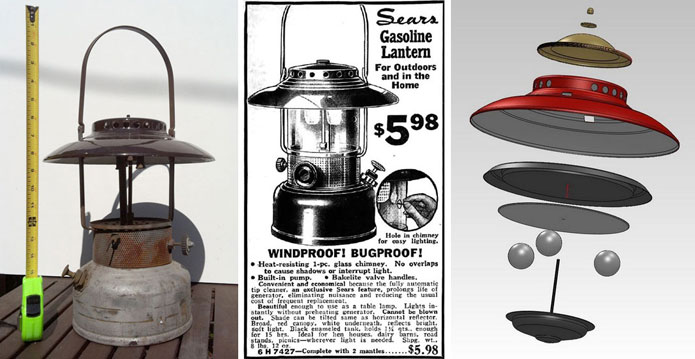 However, in his 1955 investigation into Adamski's claims, James W. Moseley interviewed Marley, who denied that he had enlarged the photos for analysis, found a "spaceman" in them, or knew of anyone who had. Moseley also interviewed German rocket scientist Walther Johannes Riedel, who told him that he had analyzed Adamski's UFO photos and found them to be fakes.[46] Riedel told Moseley that the UFO's "landing struts" were actually 100-watt General Electric light bulbs, and that he had seen the "GE" logo printed on them.[46] In 2012, UFO researcher Joel Carpenter identified the reflector-shade of a widely available 1930s pressurised-gas lantern as an identical visual match to the main portion of Adamski's saucer.[47]
In his 1955 investigation, Moseley found other flaws in Adamski's story. He interviewed several of the people that Adamski claimed had been with him in his initial 20 November 1952 meeting with Orthon, and found that these witnesses contradicted Adamski's claims.[48] One, Al Bailey, denied to Moseley that he had seen a UFO in the desert or the alien Adamski described. Jerrold Baker, who had worked at Palomar Gardens with Adamski, told Moseley that he had overheard "a tape-recorded account of what was to transpire on the desert, who was to go, etc." several days before Adamski's claimed 20 November meeting with Orthon, and Baker stated that Adamski's meeting with Orthon was a "planned operation."[36] Baker added that Adamski had tried to convince him not to expose their hoax by telling him that he could make money by charging fees to give UFO lectures, as Adamski was doing: "Now you know the [UFO] picture connected to your name is in the book (Flying Saucers Have Landed) too. And with people knowing that you are connected with flying saucers...you could do yourself a lot of good. You could give lectures in the evenings. There is a demand for this! You could support yourself by the picture in the book with your name."[12]
Moseley discovered that George Hunt Williamson, another prominent contactee and friend of Adamski, did not witness any UFO nor Adamski's encounter with Orthon, despite his public statements claiming otherwise. When Irma Baker, Jerrold Baker's wife, accused him of lying about the incident, Williamson told her cryptically that "sometimes to gain admittance, one has to go around the back door."[12] In his report on Adamski, Moseley wrote "I do believe most definitely that Adamski's narrative contains enough flaws to place in very serious doubt both his veracity and his sincerity. The reader will be moved to make for himself a careful re-evaluation of the worth of Adamski's book."[49]
In the early-to-mid 1950s USAF Captain Edward J. Ruppelt was the head of Project Blue Book, the Air Force group assigned to investigate UFO reports. In 1953 Captain Ruppelt decided to investigate Adamski's UFO claims. He traveled to California's Palomar Mountain and, dressed in civilian attire to avoid attracting attention, attended one of Adamski's lectures before a large crowd at his Palomar Gardens Cafe.[4]
Ruppelt concluded that Adamski was a talented con artist whose UFO stories were designed to make money from his gullible followers and listeners, and he compared Adamski to the famed hoaxer, carnival, and circus showman PT Barnum. In describing Adamski's speaking style, Ruppelt wrote "to look at the man and listen to his story you had an immediate urge to believe him...he was dressed in well-worn, but neat, overalls. He had slightly graying hair and the most honest pair of eyes I've ever seen. He spoke softly and naively, almost pathetically, giving the impression that 'most people think I'm crazy, but honestly, I'm really not.'"[4] According to Ruppelt, Adamski had a persuasive effect on his audience, "you could actually have heard the proverbial pin drop" in the restaurant as Adamski told of his initial 1952 meeting with Orthon. When Adamski finished his story, Ruppelt noted that many of his listeners purchased copies of Adamski's UFO photos that were on sale in the restaurant. At another lecture led by Adamski and other well-known contactees, Ruppelt wrote that "people shelled out hard cash to hear Adamski's story."[4]